Shared savings is a necessary part of the cost plus agreement. For most Contractors, they will understand their fiduciary responsibility to the Owner and will act responsibly with spending the Owner’s money. But to ensure the process is properly incentivized, the Owner and Contractor typically agree to share the savings on the project. Essentially, they agree on an initial budget, and if the project ends up being less than the budget, then the savings are shared. Typically, the savings split is in the realm of 60%-40% to 75%-25% with the larger portion going to the Owner. For this to work, the initial budget needs to be established based on proposals and substantiated cost estimates. The “savings” then comes from the diligence on the Contractor to keep costs down and to employ cost-effective building strategies. Typically, the savings does not apply to contingency and allowances. If the Owner selects an inexpensive faucet, all of that savings belongs to the Owner. (Although, the Owner may decide to apply that savings from the kitchen faucet to the increase the allowance for another item they may wish to upgrade). But, if the contract price is increased for added scope via change order, then that added amount should be used when calculating the shared savings.

Billing is the tricky part of a Cost Plus as the Contractor has to justify or support every cost. That is the nature of the contract…cost, plus. Each bill must have all the relevant invoices attached. If there isn’t a cost to the project, then the project can’t be billed. For direct work, this is pretty easy as the subcontractor invoice is evidence of cost. But what about those indirect costs? Well, as an Owner, you should expect justification for those as well. If vehicle fuel is an agreed cost to the project, each billing cycle you should see actual receipts to justify the cost. It’s not uncommon that on some jobs the Owner and Contractor agree that receipts less than $100 to $500 need not be provided as it adds immensely to the paperwork burden. Additionally, the Owner and the Contractor may agree on a standard monthly indirect cost amount and then this gets applied to each month’s invoice. To do this though, the Owner and Contractor must review in detail the indirect cost budget and then agree in writing to the monthly amount. For direct costs, the monthly bill should include all invoices from all subcontractors, material suppliers, and direct labor. Included should also be a lien release for each. (More on Lien Releases in another article). The billing packets take a lot of time and work on the Contractors part to properly assemble, and the cost of preparing this is a project cost. As an example, on a large home, the billing packet can be 6 inches thick of backup documents submitted each month for review by the Owner…that is also a lot of work for the homeowner to review, and the homeowner must still commit to paying the Contractor timely- despite the burden of review. On large commercial cost-plus projects, I’ve seen the pay application be delivered in multiple boxes each month. Both the Contractor and the Owner had a team of individuals dedicated solely to the billing preparation and review…and all of these costs are billed to the project. Remember this as you decide with your contractor the level of detail you want to see.

Sometimes during billing, the Owner unfairly challenges a cost item, and then holds up payment. This is a rare and unfair tactic that some Owners try to use to artificially drive the price lower to the detriment of the Contactor and the agreed process. In order for a Cost Plus contract to work, first, the Owner and the Contractor must TRUST each other to behave ethically, and then the contract must clearly articulate the process. Without the trust though, this process will never work. If an Owner does not believe the Contractor will act in their best interest or if the Contractor doesn’t think the Owner will trust them, then neither should enter into a Cost Plus agreement. One may even argue that they should not even do a project together as without trust, the project is doomed to have disagreements plague the process.

One billed line item that won’t have backup is the Contractor’s fee. More on this below, but the fee is typically billed at the same rate as the job progress. So, if an owner receives a pay application for, say, 25% of the project costs, then the Contractor will bill for 25% of the fee, less any previous payments.

What should be included as an Indirect Cost? Simply said, everything that affects the project. We’ve discussed above cell phones and vehicle costs. There is also home office staff and costs that are apportioned to each project. Often home office staff is included as a percentage of the total budget and that gets billed each month. Perhaps 1%-3% of the budget should be allocated here, depending on the circumstances. Insurance will be a large portion of the indirect costs. As an Owner, you’ll see General Liability, Builder’s Risk or Course of Construction, and vehicle insurance. You may also see software as an indirect cost. Remember, the nature of Cost Plus is to bill based on all costs to the project, so any means the Contractor uses to help the project, is a project cost. Some contractors use cloud-based software and the project specific fee to use this software is an indirect project cost. Also, printing for plans, paper for copies, or time supervisory staff spends reviewing the project. Also, if it’s a larger project, the Contractor may allocate some or all of an administrative assistant to the project to ensure the paperwork and documents flow correctly and timely.

As discussed above in billing, it’s not unusual for the Owner and Contractor to agree up front what the sum of the indirect costs will be for the project, and then bill a portion of that amount each month.

The Contractor and the Owner must agree what the fee for the project will be, expressed as a percentage of the project. The Contractor will then apply this fee to all direct and indirect costs to the project. Fee doesn’t get charged on fee. But everything else does get the fee applied…even design and engineering costs this is to fairly compensate the builder for their time reviewing and coordinating the drawings. The actual fee varies greatly, I’ve seen it range from as low as 3% on very large commercial projects up to 25-30% on residential remodels. As the Owner, use your best judgement and have open discussions with your Contractor about the fee. The fee is not the Contractor’s profit. It is the gross margin from your project. As we discussed in Part 1, from the fee, the Contractor still must pay home office costs that are not related to the project, such as office equipment/rent/staff, marketing, licensing, insurance, training, and a whole host of other items that general contractors must do to be properly licensed and trained. And, the Contractor must still make a fair profit, which also comes out of the fee. The breakdown of the fee is typically outside the scope of a cost plus contract. If the Owner has selected their contractor well and has built a relationship on trust, the Owner should discuss and negotiate the fee in good faith and expect the Contractor to do the same.

A properly managed Cost Plus contract is a good mechanism to keep project costs as low as possible. With a Cost Plus project, both the Contractor AND the Owner benefit from lower costs. But, both parties must trust one-another and they must agree up front and in writing what the indirect costs are. I’ve rarely seen disagreements over direct construction costs, and the times that I have, it’s been an owner questioning whether the direct cost is re-work (which the Owner should not be billed for). By far, more disagreements are about indirect costs. To avoid these types of conflicts, it may be beneficial to both the Contractor and the Owner if a hybrid approach is used. One hybrid method we’ve already discussed is where the monthly indirect costs are listed in detail at the beginning of the project and the Contractor then bills a set amount each month based on the previously approved schedule of costs. There are many other different ways to contract to build your home. If you choose Cost Plus, remember that this type of contract is very collaborative between the Owner and Contractor and works only when there is mutual trust. But if you establish that trust and both parties continue to openly work together throughout the project, then there is a great potential that the Owner will benefit from a lower cost project. But without trust, without maintaining budgetary discipline, and without ensuring everything is done in writing, this method is doomed to cause conflict and grief.

To refresh your knowledge, go here to read Part 1 of Cost Plus Contracts for home building.

Don’t trust your dreams to just anyone. 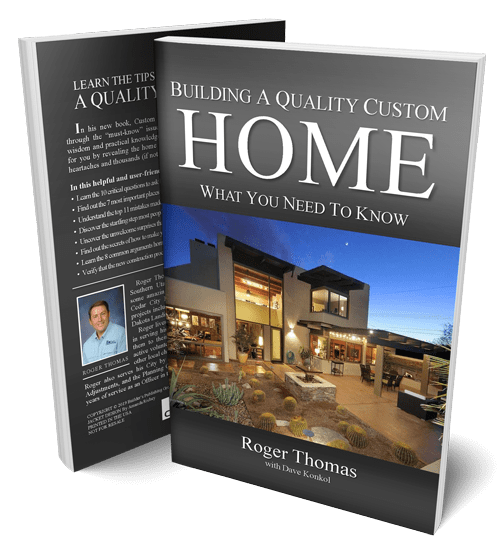 You should feel confident and excited during your home building process. After all, the builder you choose could mean the difference between a project that’s done right, on-time and on-budget, and one that costs too much, takes too long, and is fraught with quality problems.

But with every builder claiming to be the qualified, how can you be sure you’re picking the right one?

Download What You Need to Know Before Hiring a Home Builder, written by Choice Builders’ owner and author, Roger Thomas. This guide will help you choose a builder who is right for you.